"I prefer it on my wife, but now and then I sneak a little spray"

One of the things that fascinate me about the world of perfume is the mix of conservatism and avant-garde. In many of the most successful creations there is a balance of the two. The future and the past keep making love to each other in new ways, some conventional, some unpredictable.

But something that surprises me in a less positive way is the still dominating obsession with pour home or pour femme. Not so much from the new brands. They are creating a world of fragrances liberated from lazy descriptions of soft women and strong men. But the big global perfume brands of the cosmetic industry, the celebrity scents and the fashion houses… You all surprise me with your boxes. Also bore me a little bit. If you really want to make a fragrance for men or a fragrance for women, by all means... But the illusion that this is the way it h-a-s to be, are we not past that? It feels a bit like a system adapted for sales, shelves, photo shoots, logistics, excel sheets, easy life.

Anyone interested in perfume or fashion trends for that matter has heard about Byredo or/and founder Ben Gorham. Anyone who has been in Stockholm during the last five years has probably at some point been embraced by a soft Byredo-hue as the brand’s fragranced candles and bathroom products are loved by hotels and restaurants here. I love that. Not just because a lot of places now smell great, but because it is a nice sort of token of local appreciation. Byredo has become the signature scent of the Swedish capital.

However, as you might have noticed, not only Swedes love Byredo. Sweden is in fact not even one of the larger markets, both the US and France are stronger markets. This is probably unfortunately partly due to the fact that Sweden does not really have a tradition of fine perfumery. People are super-clean, yes, Swedes smell like freshly washed laundry. We have great teeth and saunas everywhere. Perfumes sell, but there is no luxury perfume culture to talk about. Now, in post-Gorham Sweden perhaps, in some places. But generally, no. There are some of us who would gladly spend our lives changing that though. (Thus this blog for example).

So. What’s so cool about Byredo?

One thing is definitely the ability to combine the traditions and heritage of fine perfumery with a very contemporary twist. Not to forget that everything about Byredo is extremely aesthetic, with a graphic profile that has been carefully created to communicate elegance but not steal the fragrance’s voice. The company works with storytelling around the fragrances, ingredients and around Ben Gorham. This is something that could be done even more I think. It is very refreshing to see perfume rhetorics that are not just empty clichés.

There is also something about the brand and communication, and the business that is dynamic and interesting. In the first couple of years most of what you heard about Byredo had to do with collaborations, for example with Acne (also Swedish) and hotels. The collaboration-theme has continued with Fantastic Man being one of the best examples. One of the first places to sell Byredo was Colette in Paris, a result of Ben contacting them to ask if they wanted to have a coffee and see his products. 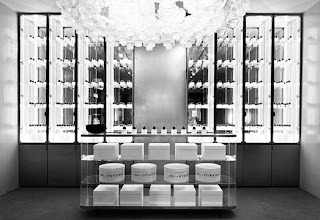 From the beginning Byredo’s founder Ben Gorham has been a big part of the Byredo story in media. No wonder, his background, style and character seem to made for it. Brought up in Stockholm, Toronto and New York but with roots in India. He had a career as a pro in basketball, studied architecture. Covered n tattoos, famous for his humble and kind appearance.

You sort of know this is a person who can offer some truly great conversation.

I have never met Ben but I do hope that I will have the occasion someday to talk with him about fragrances and the stories around them. Continue reading for some interesting facts about Ben and the history of Byredo, as well as some beautiful quotes gathered from various interviews.

Let’s talk about another one of the animalistic perfume ingredients. Civet. Just like musk its value for the perfume industry lies in its ability to enhance fragrances and prolong the life of scents.

So now to the less romantic part.

Civet, or civetone as it is called at its more refined stage, is a substance taken from an animal called the African Civet - a nocturnal animal in sub-Saharan Africa. It eats most things, including snake and species that other animals find too poisonous to have for dinner. When moving around a territory the civet spreads a fluid to mark it. This fluid comes from the animal’s perineal glands and is the link between this African mammal and the perfume industry. 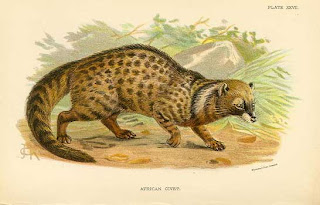 There is definitely a market for civet, which has led to numerous civet farms where animals are kept under dubious conditions only to serve as sources of gland secretion. One animal provides the owner with three to four grams per week.

Civet is one of the absolutely oldest perfume ingredients, particularly popular in France. It has a strong odor similar to musk and is used in very small quantities as a fixative that gives the fragrance depth and longer life. Chandler Burr compares it to using whole cream in soups and sauces.