Cuban artist Reynier Leyva Novo's work has attracted international attention, for example at the Venice Biennale 2011. Northern Swedish city Umeå is perhaps not what an international art crowd would expect to be a venue this artist would choose, but it is not so surprising when you take a closer look at ambitious Bildmuseet which now presents the artist’s first solo exhibition outside of Cuba.

With a great interest in the history of his country, Reynier Leyva Novo explores, questions and stages different versions of Cuba’s past. He focuses in particular on the period around the liberation from Spain in 1898. His art invites the onlooker to reevaluate Cuba’s history and our interpretations of it. One of his pieces, The scent of war (Los olores de la guerra), consists of a number of perfumes named after generals and the places where they led their troops. 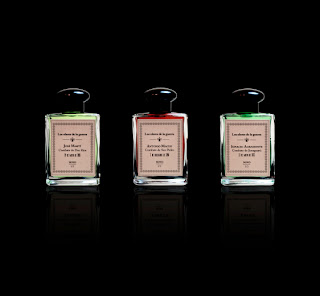 Reynier Leyva Novo's is one of the artists who understands the power of scent and the fascinating synergy between our sense of smell and our memories. But he adds a dimension to this, by working with the scents power to create a new image also. ‘The scent of war’ consists of three fragrances that the artist has developed. The fragrances help the audience to create their own inner images and stories around a historical event, in this case the three generals that died in battle. Each general has a fragrance named after him. The fragrance is exposed together with a poetic text. I like a lot about this idea. However I am somewhat confused by the fact that the fragrances cannot actually be smelled by the visitor to the exhibition. What is then the point of having created a fragrance? Is it the idea of a smell that is the point? The ability of our mind to create that by itself? Why then have fragrances? And if they have been made, why not the people smell them?

I need to find Reynier Leyva Novo and ask him! To be continued...

About the artist
Reynier Leyva Novo (born 1983) lives and works in Havanna. He has participated in several exhibitions in Cuba as well as at the Venice Biennale (2011), the MARTE (Museum of Contemporary art) San Salvador, El Salvador (2011), the Liverpool biennial, UK (2010); A gentil carioca, Rio de Janeiro, Brazil (2008).