Bvlgari released Omnia in 2003. I was at that time a young woman taking the first steps in my career and hadn’t really even thought about perfumes that much at all to be honest. I suppose in a way, I was more into discovering myself than defining myself. But it was winter and I was buying Christmas gifts and wanted to buy something for myself. To commemorate this time in my life. I went to the perfume section of Stockholm department store NK. 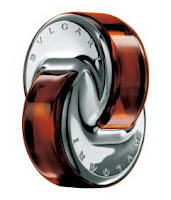 The first time I tried Omnia it felt sort of self-evident but not in a sensational way. Just, ”yes, there it is”.  It was definitely a kind of signature scent for who I was then. I adored the unusal bottle. Since then I have bought many perfumes, some have been perfect for a while, for specific situations or for more. But this fragrance has actually stayed with me, and it might still be the one that I get most comments about when I wear it. It seems not that many people are familiar with it, at least not in Scandinavia, and  those who are either love it or hate it. Actually more often the latter. Thus, when I go to get a new bottle it is never easy to find. I have to order it or wait while someone goes to see if they have one ”in the back somewhere”.

Omnia was created by nose Alberto Morillas. The fragrance was said to have been inspired by the spices discovered by Marco Polo on his voyages. The notes include black pepper, mandarin, masala tea, saffron, ginger, cardamom, cloves, cinnamon, nutmeg, almond, chocolate, lotus blossom, and sandalwood. The lotus is discrete which I am happy about and the Christmas dessert feeling only lasts for a brief moment. Then it lands in this soft saffron, cardamon embrace. Sometimes you feel the clove just briefly.

I love this fragrance. It is a non-choice for me, I don’t have to be in a particular mood to carry it off, not wear anything special. It just blends with me. I always return to it at some point even after longer periods of infidelity. It’s is a sort of default fragrance. And the nostalgia of it makes it special. Also, the fact that I rarely, if ever, meet someone else who has it makes it feel even more ”mine”.

There have been new versions of Omnia since the original first one. These however I do not get along with at all.
Posted by Unknown at 7:00 PM